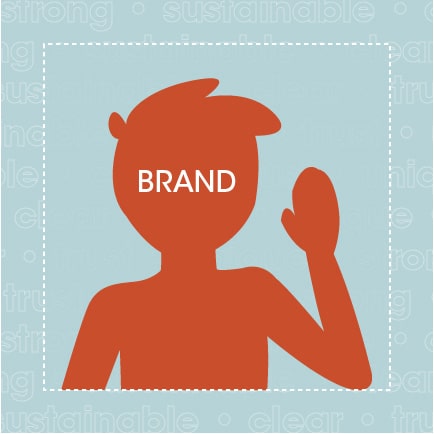 What’s the first thing that comes to mind when you hear the word “branding?” There’s a good chance you think of a logo or tagline, but not necessarily a person. However, people can have a brand of their own, too. Branding isn’t limited to businesses and organizations, and today we’re going to take a look at what personal branding is.

First, let’s define the word branding. At Rock Paper Scissors, we define branding as any touchpoint that a customer or staff member encounters with a business. This is more than a logo or tagline. Branding includes signage, websites, the office or storefront, the people, interactions over the phone or in person, your products and services, and more. A brand isn’t a part of a business; it is the business.

So what does branding look like on a business? Take Publix for example. Publix’s visual branding is clean, simple, and easy to recognize, but what stands out even more is how a customer experiences the Publix brand when they shop there. Friendly sales associates that are ready to answer a question or find a product, stores that are clean and easy to navigate, and the ability to use coupons from competitors are just a few of the ways this grocery store chain has created an shopping experience unlike other grocery stores and has set a standard so that no matter which Publix location you’re at, the experience is consistent each time. The brand has taken it’s motto of “Where shopping is a pleasure” to heart and woven it throughout its culture to help make the mundane task of grocery shopping more enjoyable. The icing on the cake that really sets Publix apart, though, is that the baggers that help customers to their cars – a small act of customer service that nearly all other grocery stores have abandoned.

What is Personal Branding?

But what is Personal Branding? Napoleon Hill first introduced us to the idea in 1937 in his book Think and Grow Rich, in which he wrote “It should be encouraging to know that all the great fortunes began in the form of compensation for personal services, or from the sale of IDEAS.” Over 40 years later, Al Ries and Jack Trout brought the idea up again in the book Positioning: The Battle for Your Mind, when discussing the topic of individuals positioning themselves and their careers. “You can benefit by using positioning strategy to advance your own career. Key principle: Don’t try to do everything yourself. Find a horse to ride,” they wrote.

In other words, your personal brand is what helps set you apart from other people, whether in business or in everyday life. It’s the distinguishing factors that make you more memorable to the people you interact with and can take them from saying “John who?” to “John Jones!” when they think back to conversations with you.

Let’s take a moment to test this theory. What do you think about when someone…

Each of these can leave either a positive or a negative impression on others, and it’s all a part of the individual’s brand. If you’re consistently late to meetings, that tells others that you don’t value their time, which can lead them to avoid associating with you. On the other hand, if you send a “Thank You” note even when it’s not necessary, people will remember that you appreciated their time and are genuinely grateful that they took the time to meet with you.

How to Create a Personal Brand

We’ve mentioned a few of the things that factor into a personal brand, so let’s dig a little deeper and talk about how a personal brand is created. Below are some of the items to take into account when building your personal brand:

So what does this look like in real life? Let’s look at a few celebrity examples. American Idol helped make Ryan Seacrest a household name and catapult his broadcasting career with opportunities for his own television and radio shows, the hosting job of Dick Clark’s New Year’s Rockin’ Eve, and most recently, the co-host position of Live with Kelly and Ryan. In addition, he has launched a clothing line with Macy’s that is reflective of his own style.

In addition, Seacrest is passionate about helping others, particularly children. His family established the Ryan Seacrest Foundation, a non-profit organization that works to inspire children through entertainment and education-based initiatives. The organization has created Seacrest Studios, which are broadcast media studios in pediatric hospitals around the country where children receiving treatment can explore radio, television, and new media programs. Children and their families have the opportunity to meet with celebrities that visit the hospitals, be a part of creating radio shows, music videos and shows, and more.

Another great example is entrepreneur Sir Richard Branson, founder of Virgin Group, which includes a publishing, entertainment, travel, hospitality, retail, and more. Branson can be considered somewhat of a trailblazer, doing things much differently than other entrepreneurs and that has led him to great success and an empire worth millions. In addition to his never-ending entrepreneurial spirit, Branson is known for being adventurous, making several attempts to break world records like crossing the English Channel in an amphibious vehicle in the shortest time (a record he broke). He has also dabbled in television, film, print, and politics.

Branson is also very involved in humanitarian efforts around the globe. He is a founding sponsor of the International Centre for Missing & Exploited Children, launched Virgin Startup – the official delivery partner for the UK’s Start Up Loans program, started the Branson School of Entrepreneurship in South Africa, and is very involved in environmental initiatives.

In many cases, a company may seek celebrity endorsements when the celebrity’s own personal brand and interests align with the company’s brand. Adding a celebrity name and face to the brand can offer many benefits, but as we have seen, endorsements can go wrong. Consider Tiger Woods, who was once branded as golf’s “golden boy.” When people found out who he really was, his fans were devastated because the brand he built didn’t align with who he really was. As a result, he also lost endorsement deals with Gillette, General Motors, AT&T, Gatorade, and more.

Michael Phelps is another example. He lost a sizable endorsement deal with Kellogg’s after a photo of the Olympian smoking pot surfaced, and contracts with AT&T and Rosetta Stone were not renewed. The moral of this story is to always conduct yourself in a way that aligns with your personal brand if you want to maintain your reputation and avoid causing harm not only to your reputation but also to the reputation of those you associate with.

The internet has undoubtedly become an environment where personal brands can grow exponentially overnight. Just ask one of the many YouTubers out there. By sharing videos of their day-to-day lives, experiences, tips, ideas, and more, YouTube is a place where people can connect with others and build an empire off of a simple video. Rosanna Pansino and iJustine are two YouTubers that have found a following by sharing their videos.

Pansino began her YouTube channel as a way to become more comfortable in front of a camera, which paved the way for her to begin filming the process of her adventures in baking. These videos quickly gained momentum, and viewers eventually began requesting more. Pansino’s Nerdy Nummies is now one of the most well-known baking shows on YouTube with more than 8 million subscribers. She has also written The Nerdy Nummies Cookbook, which was a New York Times bestseller in 2015.

iJustine got her start sharing about her daily life in video blogs, but her true claim to fame is the “300-page iPhone bill” video that she created and uploaded to YouTube after receiving her first bill after purchasing an iPhone in 2007. Within ten days, the video was viewed more than 2 million times. She’s since been named one of the “most influential people online” and has earned a number of guest appearances on other web series and television shows, as well as some acting roles. In December 2016, she became a boardroom advisor to Arnold Schwarzenegger on The New Celebrity Apprentice television show.

Similar to YouTube, Instagram has also become a place where people have built their personal brands and gained a massive following. While her name was already known by thousands before she joined Instagram, Kylie Jenner has used the power of Instagram to not only establish her brand, but also build her celebrity status, business, and wealth. She has a following of over 99 million and uses the platform to share about products from her cosmetics line, collaborations, and more.

The Dark Side of the Pretty Pictures

While celebrities like Kylie Jenner seem to have it all together in their picture-perfect posts, there is certainly a downside to the pretty pictures. They don’t always show reality, which can make individuals seem less like average people when all we see are the perfect moments of their lives. This is important to keep in mind when building a personal brand because you want others to be able to relate to you on that level and to understand that you are just like them, flaws and all.

At the end of the day, your brand creates ripples in your sphere of influence. With that in mind, always aim to: