Nothing Missing: Why The Puzzle Piece Isn’t Used in Autism Acceptance 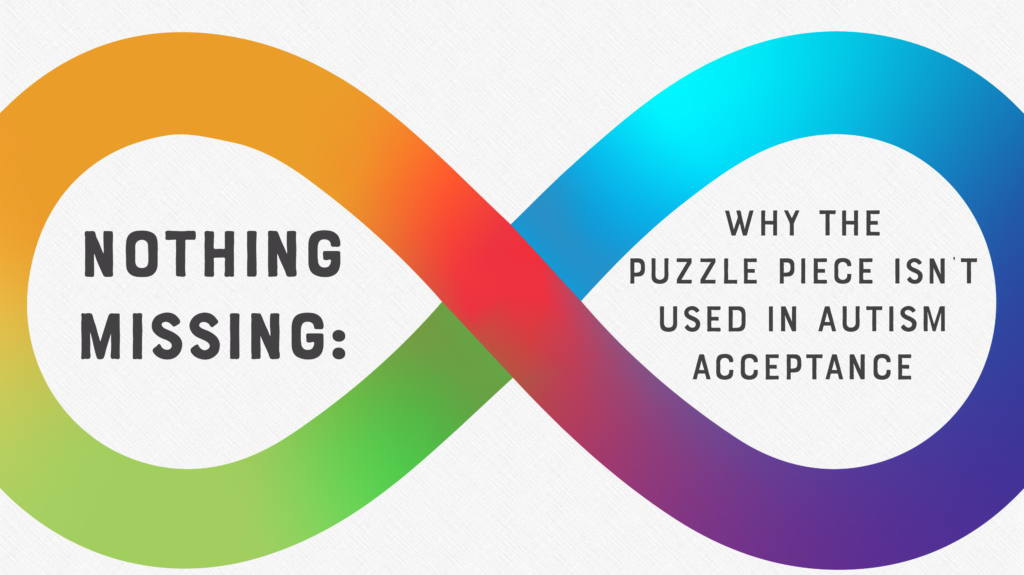 That’s exactly what’s been happening within the Autism community in recent years. Not only has there been a call to move away from the original symbol for awareness, but also to replace the word awareness with acceptance, and it’s all for very valid reasons. Let’s take a look at the reasons why.

The History of the Autism Puzzle Piece

The puzzle piece symbol, which originally included an image of a crying child before eventually being replaced with vibrant colors, was initially accepted by autism organizations because it hadn’t been used in this kind of context before. It also really stood out from symbols and logos used for commercial purposes at the time.

The Shift to the Infinity Symbol

Over time, as more was discovered about the autism spectrum, the puzzle piece symbol began to be viewed in a negative light by the autism community. Those who spoke out in opposition said they felt it created the impression that autism was a riddle to be solved or that those with the condition were incomplete. The criticism over the puzzle piece symbol was handed over to the Autism Research Journal’s editors, who initiated the process of updating the symbol.

The group’s research led them to think about the autism spectrum and move toward a symbol that represents it more fully. In February 2018, the puzzle piece was replaced with a rainbow-colored infinity symbol to represent a spectrum, diversity, and difference. It removes the idea that those with autism are missing parts or are incomplete and that “Having a lack does not make me less human than the rest of the world,” (Good Autism School).

From Autism Awareness to Autism Acceptance

Not long after the new symbol was introduced, a push to pivot away from references of Autism Awareness Month began. In March 2021, the Autism Society of America along with leading disability organizations in America announced it was shifting to refer to April as Autism Acceptance Month.

In a press release, the Autism Society of America shared that acceptance is one of the major barriers individuals and families impacted by autism face as they work to find and develop their support systems. Many members of the autism community along with their advocates across America have long-used the term “acceptance” as it indicates “more fully integrating those 1 in 54 Americans living with autism into our social fabric.” This includes the Autistic Self Advocacy Network, which has positioned April as Autism Acceptance Month since 2011.

The Autism Society of America also stated that “The shift in terminology aims to foster acceptance to ignite change through improved support and opportunities in education, employment, accessible housing, affordable health care and comprehensive long-term services.”

Along with these shifts in symbolism and terminology, there is a pivot in how those on the autism spectrum are now considered neurodivergent. In the late 1990s, sociologist Judy Singer, who is autistic, first began using the term neurodiversity. The term “refers to the concept that certain developmental disorders are normal variations in the brain. And people who have these features also have certain strengths,” according to WebMD. In other words, neurodivergent individuals are simply built differently, rather than missing something, broken or disabled. Other types of neurodiversity include attention deficit/hyperactivity disorder (ADHD), dyslexia, hyperlexia, Tourette’s syndrome, and Obsessive-Compulsive Disorder (OCD), among others.

As we learn more about conditions that impact members of society, it’s important to think about the words and symbols that are associated with them. You also have to factor in how society and our perceptions change over time and how that impacts the way others view a situation, and  adjust the images and messages associated with the things for which awareness should be raised. Changes like these are good because it provides the opportunity to not only be more inclusive but also to have images and messages that better resonate with our audiences.

Does Your Brand or Message Need a Change?

Is your logo, brand symbol, or name perceived how you intend, or are changes needed to shine a better light on your efforts and all the good you’re doing in the world? If you think a brand refresh may be in order, we can help! Contact us to request a consult so we can learn more about what you’re doing and start a conversation about how we can help transform your brand and message so you’re putting your best foot forward when presenting your business or organization to others.